Hi there! Are you ready for some additional Meet The Team content?

After we already briefly introduced you to Haris, the newest member in our Development Team, via LinkedIn a couple of weeks ago, we thought it is time to properly introduce him to the outside world. You would like to learn more about Haris and his road from studying Computer Science in Bosnia and Herzegovina to working for a German startup? We’ve got you covered. Besides his personal story of becoming a developer we also talked about his first weeks at edyoucated and the projects he will take on in the near future.

Thanks for taking the time, we are more than excited to get to know more about you. Could you start by telling us a little bit about yourself?

Thank you, it is always interesting getting to know new people and meeting a new team, but for that experience to be complete one has to also introduce himself appropriately! Responsible, sarcastic, honest, introvert - those were some of the words used by my friends to describe me in a single word that first comes to their mind. What I found interesting is that the words used were not too related to my professional career and as such probably reflect the fact that most of my friendships are also not too work-related either. Let’s just hope that doesn’t mean my friends don’t know or don’t appreciate what I do for a living! 😄 On a more work-related note, I am a software/web engineer, full-stack developer, with a Master’s degree in Computer Science from the University of Sarajevo, Bosnia and Herzegovina. I was born in Zenica, which is a city directly in the middle between Sarajevo, where I currently live, and Maglaj - a small town where I grew up and went to school to. After graduating from college in Sarajevo, I continued to live and work here - although I have been a remote-worker for over 5 years now and thus strictly-speaking not really “work in” Sarajevo, but mostly work from Sarajevo.

Why did you decide to become a Full-Stack Developer? Did you always want to work in a Startup?

It is a bit difficult to plan you professional IT career to a specific job role, but I was at least quite certain during my high school years that I will indeed end up in IT. Back then, around 15 years ago, I first got into web design and development, by working on my school website. Then it just kind of went into that direction by itself and here I am today - still primarily involved in web development.

My entrance into the world of computers happened around 1998 when I first got a personal computer. Since then it has been quite a consistent and persistent relationship and will hopefully continue to be so until way in the future.

Working for a startup has quite a few challenges and interesting sides to it and I would say there’s also a certain appeal to that whole experience of being part of something potentially amazing evolving directly in front of your own eyes and you being able to make a contribution to that. 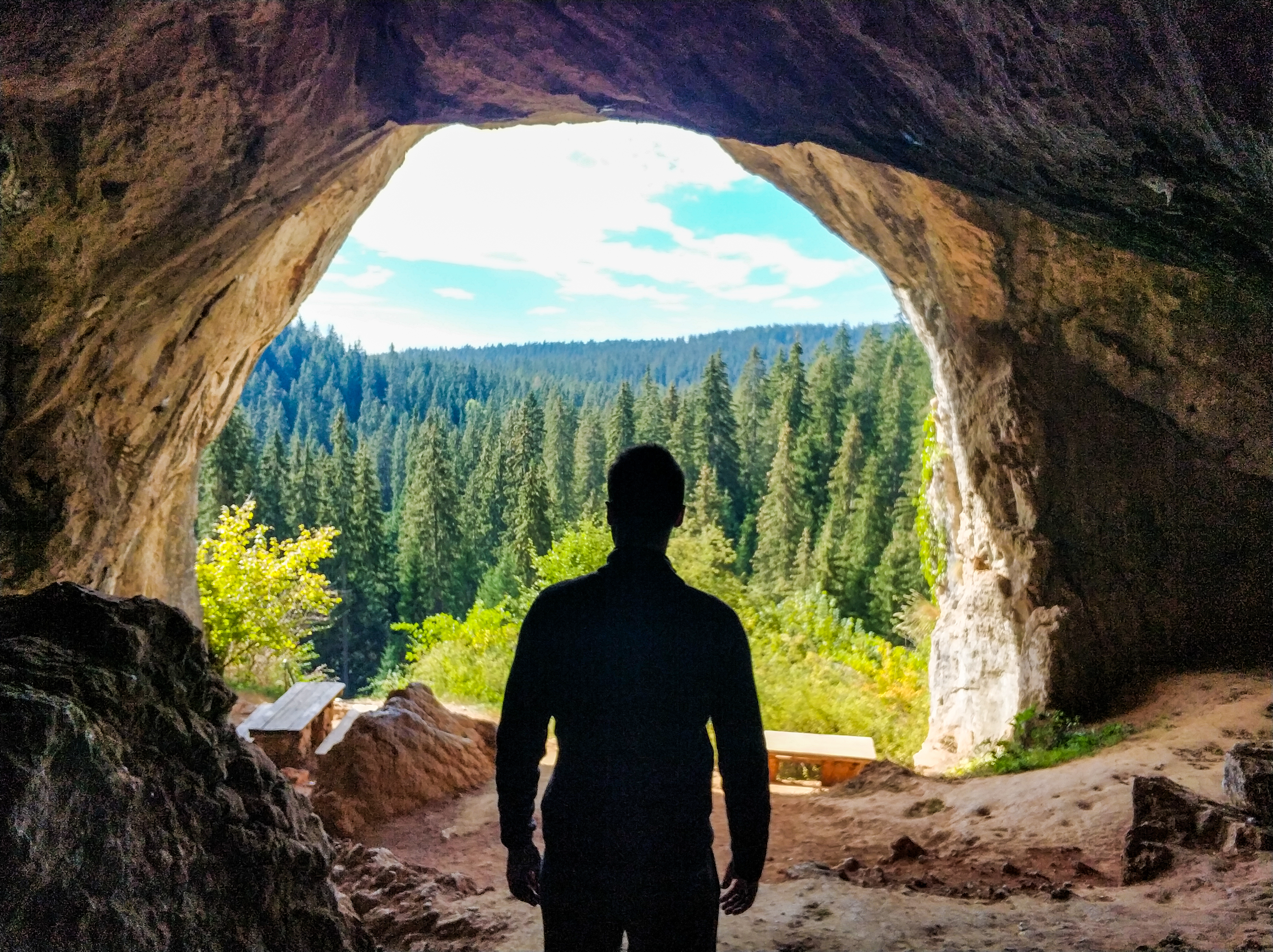 Haris at the Bijambare Cave, near Sarajevo

The edyoucated team already was spread over different locations throughout Germany. Having you joining the team all the way from Bosnia makes us international 🎉. What motivated you to join a startup located in another country?

I’ve always been open to various international working opportunities and being in the IT industry, in my view, inevitably means you are part of a big global multicultural community, where to a certain degree you don’t even consider international borders and countries, but we rather all belong to one big IT planet.

However, from my own experience, there can be language barriers preventing people to collaborate efficiently and in that sense you can feel slightly more limited by which languages you actually speak. English is nowadays definitely a “must-know” and is not even considered an asset anymore, rather just a liability if you don’t know it. Having learned German in school I feel comfortable enough to work within a German-speaking environment, but I also think other languages like Spanish or Chinese are super-important and worth learning.

In general, I’ve been somewhat connected to the German country and culture for a long time through various personal and professional examples, and having the opportunity to work with an amazing startup from Germany was a very natural and sensible choice, even in regards to potentially relocating there in the (near) future.

Could you give us a sneak-peak into one of your first projects? What will be your main responsibilities in general?

I will be involved in both Frontend and Backend development, meaning both the “visible” and “invisible” parts of the system. I am also quite interested in UX/UI development, so I hope to bring additional perspective and knowledge in that regard as well. On top of that, I am also a big fan of good DX (Developer Experience) and hope to be able to help the development team in that aspect too.

As with any new project, it takes a bit of time to settle in and get comfortable and fully effective in your work, but I have a great development team here in edyoucated supporting me and helping make sure the integration is as smooth as possible.

I hope in any case to make my contribution visible not only to the development team but more importantly to our clients and their satisfaction.

What would be the first adjective you would use to describe your first weeks @edyoucated? Why would you choose that word?

Certainly adventurous and experimental from an engineering point of view, having to familiarize myself with a new codebase and a completely new project. However, it was also very interesting from a communication point of view, as it was the first time ever for me to actually listen, speak and write in German on a daily basis, having previously only learned it in school.

In general, it’s been a very pleasant and fun experience so far and there’s a really positive vibe being felt within this team!

Jan, Marius, and Marcus already told us a bit about unknown skills they possess or skills they would like to learn in case they had some free time. Are you currently learning a new skill? If so, which one?

Pursuing new skills is something I like to do almost on a daily-basis. It’s kind of an important additional drive in my life, setting small goals every now and then, eventually scoring such small wins adds a certain degree of satisfaction and pleasure to life.

Currently I’m slowly learning yoga and meditation, trying to integrate it into my daily routine. In fact, I am trying to include at least a 30-Minute book reading session into my daily routine as well. Since the last two years I’ve been consistently trying to optimize my daily schedule and make it more efficient in terms of self-improvement and one of the core aspects of it includes going to bed and waking up at roughly the same time every day, with a clean 8-hour sleep period. But it’s all definitely not so easy to practice and the challenge is to always push consistently towards those goals every day.

When we are talking about unknown skills, I would humbly say there aren’t any. My impression is that I am a bit of an allrounder, someone who’s reasonably good at most of the things he likes to pursue and also someone who actually likes to get involved into a lot of different topics. Let’s just say my main skill is that I strongly believe and live by the principle that every skill can be learned - given the appropriate time and motivation.

“Anyone Who Has Never Made A Mistake Has Never Tried Anything New.”

And we’re already finished… Thanks so much for taking the time, Haris! Anything else we forgot, that you would like people to know?

I have a lot of interests, so I will just list out most of the related keywords in case anyone finds something common to talk with me about: Formula 1, tennis, football, FC Bayern, basketball, swimming, fitness training, hiking, e-scooters, cars, astronomy, cosmology, ecology, evolution, genetics, psychology, history, philosophy, global politics, cyber security and privacy, electronic gadgets, go-karts, metal music, self-improvement, comic books and movies. 🚀

*You would like to become part of our team as well? Check out our open positions!*

Cannot wait to get more details about our team? In case you haven’t checked them out already, we also talked to many other teammates!

more on this topic:

Meet Tobias - 23 - Intern Business Development - The Generalist Today we would like you to meet Tobias Boldizsar, currently the newest…

Franca Bluhm joined us in early August and contributes to the Marketing & Sales team. In her Meet The Team-Article, she gives us insights…